UEFI is a newer type of computer firmware that stands for “Unified Extensible Firmware Interface”. It is a replacement for the traditional BIOS firmware that has been used on computers for many years. UEFI offers several advantages over BIOS, including support for larger boot volumes, faster boot times, and more security features. However, not all computers support UEFI, so you may need to convert your computer from UEFI to BIOS in order to use certain features or programs. In this article, we’ll show you how to convert a computer from UEFI to BIOS.

Why would you want to convert UEFI to BIOS?

There are a few reasons why you might want to convert UEFI to BIOS. Maybe you’re trying to install an older operating system that doesn’t support UEFI, or maybe you’re having trouble getting UEFI to work with your hardware. Either way, converting UEFI to BIOS is usually a pretty simple process.

Keep in mind that converting UEFI to BIOS may cause some problems with your computer. For example, you might not be able to boot from a USB drive or you might have to re-install your operating system. So, if you’re not sure what you’re doing, it’s probably best to leave UEFI enabled.

How to convert UEFI to BIOS on Windows 7

To convert UEFI to BIOS on Windows 7, you need to do the following:

1. Access the BIOS/UEFI setup menu. This is usually done by pressing a key during bootup, such as F1, F2, or F10.

2. In the BIOS/UEFI menu, navigate to the Boot tab.

3. Under Boot Options, select the Legacy Boot option. This will enable the BIOS to boot in Legacy mode.

4. Save your changes and exit the BIOS/UEFI menu.

5. Your computer should now boot in Legacy BIOS mode.

How to convert UEFI to BIOS on Windows 8 and 10

There are a few reasons why you might want to switch from UEFI to BIOS. Maybe you want to install an older operating system that doesn’t support UEFI, or maybe you’re having stability issues with UEFI and want to try BIOS instead. Whatever the reason, converting from UEFI to BIOS is a relatively simple process.

On Windows 8 and 10, the process is a bit different than on older versions of Windows. To convert from UEFI to BIOS, you’ll need to use a third-party tool. We recommend using the Rufus tool, which is a free and easy-to-use utility.

Once you’ve downloaded Rufus, launch it and select your USB drive. Then, under the “Boot Selection” menu, select the “Disk or ISO image” option and browse to your Windows 8 or 10 ISO file. Finally, under the “Partition Scheme and Target System Type” menu, select the ” MBR partition scheme for BIOS or UEFI computers ” option.

Click “Start” to begin the conversion process, and when it’s finished, you’ll be able to boot from your USB drive and install Windows 8 or 10 in BIOS mode.

There are a few different ways to convert UEFI to Legacy BIOS on Windows (7, 8 and 10), but the most common is to use a tool like Rufus. This will create a bootable USB drive that can be used to boot into Legacy BIOS mode on any computer.

Another way to convert UEFI to Legacy BIOS is to use the built-in Windows tool, but this only works on Windows 10. To do this, open the Settings app and go to Update & Security > Recovery. Under the “Advanced startup” section, click the “Restart now” button. This will reboot your computer into the Advanced Startup Options menu. From here, you can select the “Use a device” option and then choose your USB drive. This will boot your computer into Legacy BIOS mode.

whichever method you choose, make sure to back up your data before proceeding, as there is always a risk of data loss when making changes to your BIOS. 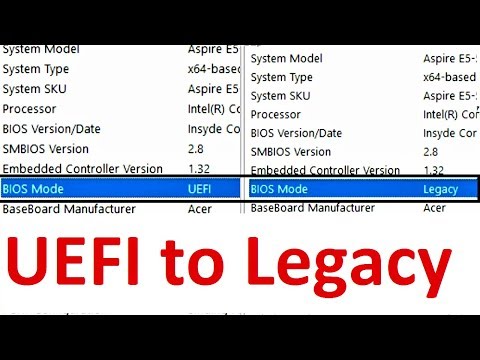 How to Center the Start Menu Along With Taskbar Icons in Windows 10?