Assassin’s Creed: Valhalla is an upcoming action-adventure video game developed by Ubisoft Montreal and published by Ubisoft. It is the twelfth major installment and the twenty-second release in the Assassin’s Creed series, and a successor to the 2018 game Assassin’s Creed Odyssey. Set in 873 AD, the game recounts a fictional history of the Viking invasion of Britain. Players take control of Eivor, a Viking raider, and can choose to play as a male or female protagonist. The game is played from a third-person perspective, and its world is navigated on foot or on horseback. Players can raid British settlements, engage in large-scale battles, and assassinate targets.

It’s no secret that Ubisoft’s Assassin’s Creed franchise is one of the most popular in gaming. The series is known for its expansive open-worlds, and Assassin’s Creed: Odyssey took this to the next level. Odyssey was praised for its huge map, which was said to be the biggest in the series.

Now, it looks like the upcoming Assassin’s Creed: Valhalla will be topping Odyssey in the map size department. In an interview with Game Informer, Assassin’s Creed Valhalla creative director Ashraf Ismail confirmed that Valhalla’s map will be “a bit bigger” than Odyssey’s.

This is sure to be exciting news for fans of the series, as they’ll have even more real estate to explore in the next installment. It’ll be interesting to see how Ubisoft utilizes the extra space, and what new features and activities they’ll be able to pack in.

We’ll have to wait and see how Valhalla’s map compares to other open-world games when it releases later this year. For now, it’s safe to say that Odyssey’s map won’t be the biggest in the series for long.

What We Know About The Map Size

Assassin’s Creed: Valhalla’s map size is actually a “bit bigger” than Odyssey’s, according to game director Ashraf Ismail. That’s not to say that the game is massive, but it is a tad larger than its predecessor.

This is due in part to the game’s setting: the map covers England, Norway, and parts of Scandinavia, which are all larger than the Greece of Odyssey. Ismail also said that the game’s open-world design has been “refined” to make better use of the available space.

This means that, while the game may not be as massive as some other open-world titles, it should still offer plenty of room to explore and plenty of things to do. So, if you’re looking for a huge open world to get lost in, Assassin’s Creed: Valhalla may be just what you’re looking for.

Why The Map Size Matters

When it comes to video games, size does matter. That’s why when Ubisoft announced that Assassin’s Creed: Valhalla’s map would be a “bit bigger” than Odyssey’s, fans were eager to see just how much bigger it would be.

After all, Odyssey’s map was already massive, and Valhalla is said to be even more ambitious in scope. So, just how big is Valhalla’s map?

Unfortunately, Ubisoft has yet to release an official map size for Valhalla. However, based on what we’ve seen so far, it’s safe to say that the game will be pretty darn big.

In fact, one fan has already created a rough estimate of the map size based on the game’s E3 demo. And according to their calculations, Valhalla’s map is about 33% bigger than Odyssey’s.

That means we can expect Valhalla’s map to be around 70 square kilometers. That’s pretty massive!

Of course, map size isn’t everything. It’s also important to consider the quality of the content that’s included on the map.

For example, a game like Grand Theft Auto V has a relatively small map compared to something like Skyrim, but the content on GTA’s map is much denser and more interesting.

So, while Valhalla’s map size is impressive, we’ll have to wait and see how the actual content measures up. Still, it’s exciting to know that we’ll have a massive world to explore when the game launches later this year.

What This Means for The Gameplay

It’s been a while since we’ve had a new Assassin’s Creed game, and fans are eagerly anticipating the release of Valhalla. One of the things that people are most curious about is the game’s map size.

However, even though the map size is bigger, that doesn’t necessarily mean that the game is going to be better. It all comes down to how the game is designed and how well it utilizes the space that it has.

We’ll have to wait and see how Valhalla turns out, but it’s looking like it’s going to be a very impressive game. 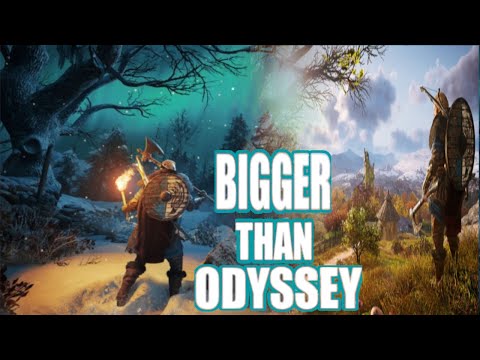 Fix: No Sound on iPad

Photoshop Crashes when Printing on Windows 10

How to Select and Specify Colors for the Background and Accent in Windows Server 2012 R2?